You may or may not know that I have a wonderful god-daughter called Amelia.

Amelia is seven and has a rare combination of learning difficulties and spectrum conditions which mean that she doesn’t speak and has a mental age well below her actual age.  You may think this defines her but it doesn’t.  She loves swimming, animals, dancing, watching films and running around – like any seven year-old.  She distrusts anything that’s not part of her routine but she learns and gets used to dealing with new things as well.

It’s well known that kids are likely tell things to you straight because they lack the social awareness to ‘dress up’ an unflattering observation and you can multiply that effect by about ten to get Amelia’s view of life.  There is absolutely no artifice with Amelia because in her world, there is only what matters to her and what doesn’t.  Why is that worthy of mention?  Because when you get an unprompted hug from Amelia, it’s the only thing in the world she wants to do at that time and it’s an amazing feeling.

Obviously, Amelia’s schooling is outside of the mainstream system.  She attends the Astley Park School in Chorley and they do wonderful work to allow her to overcome her disabilities as best she can.  As you can imagine, the school’s resources are stretched and there’s invariably a situation where more can be achieved if only it could be funded.

To help the school and to give Amelia the best education she can get, her dad (Warren) has taken on a variety of sponsored endurance challenges.  Last year, he did the Greater Manchester Marathon, the Brathay Windermere Marathon and the Great North Swim (in Lake Windermere) and raised thousands of pounds along the way.

This year, he decided to push himself further, doing a ‘Back2Back’ variant of the same three events.  This meant doing the ‘Born Survivor’ challenge at Lowther Castle the day before completing the Greater Manchester Marathon in 4:45, running the course of the Brathay Windermere Marathon the day before the event – and then doing the marathon proper the next day.

Finally, it’s back up to Cumbria on June 10th to do two swims (on Friday and Saturday) at this year’s Great North Swim.  Characteristically, his first swim is a 5km event, further than he’s ever swum before – even in training.  On Saturday, he’ll be doing the relatively straightforward (!) mile swim with our mate Aaron – who’ll be making his competitive outdoor swimming debut.  Aaron will also be raising money for Amelia’s school and ongoing care.

If any of this has impressed you (and it’s tired me out just typing all of this), I implore you to visit the links below and add your support – any amount, no matter how big or small will help make a difference (wow – how difficult is it to ask for money without sounding like you’re on Comic Relief?!)

And Aaron’s is here:

Of course, no-one expects you to sponsor both of them (although we did for reasons I’m still struggling to understand).  Quite frankly, it doesn’t matter which you support as it all gets pooled together at the end but if you pressed me, I’d suggest you sponsor Aaron – he’s about 500 quid behind Warren and we can’t have him feeling too inferior when he’s about to swim a mile in lake water for a mate’s daughter’s school, can we?  Also, there’s a small chance that Warren might get a bit big-headed about all this if it all just goes to his page…

Anyway, I digress.  “You can pledge your support at any time but do support” etc. etc.  In case I haven’t tugged hard enough at your emotions, here’s a picture of Amelia and her Daddy after last year’s swim.  I’m sure she’d thank you with a hug, if she knew how you were helping her and, trust me, you’d feel that was recognition beyond any price.  If not, I’m afraid you’ll have to make do with all our heartfelt (and socially correct) thanks.

Thanks for reading and make sure you follow the links!! 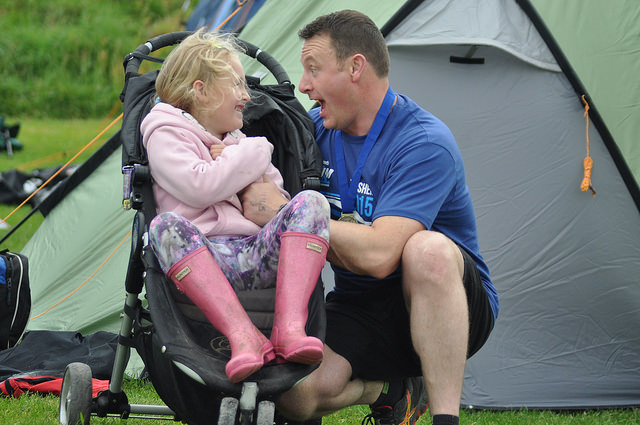 Would you like some extra resonation to your business? Click here to email me and I'll be happy to show how I can help!

Brought to you by: