I was nominated by Helen for this ten favourite travel images ‘challenge’ thing on Facebook. Unlike everyone else, I’ve decided not to string it out over 10 days – and I thought I’d compile all ten images on here.

In the days when cameras were cameras, you either didn’t take photos or accepted that rubbish ones came along when they did. I managed to get this utterly terrible photo in one of the most amazing places on Earth and it’s my only photographic record that I was ever there. The resolution is shocking, the fashions are highly questionable and I offer no excuse at all for that bum bag. To the right of the picture is Lenin’s mausoleum (I didn’t bother viewing the body), behind me is The Kremlin, specifically the Spassky Tower and just perfectly out of shot to the left of the frame is St. Basil’s Cathedral, one of the most astounding sights in the world.

All things considered, this is a truly awful photo that just happens to remind me of an amazing, unique two-week coming-of-age experience. BTW, I’m stood next to Mike, my Russian exchange student host, whom I still haven’t managed to find on Facebook. 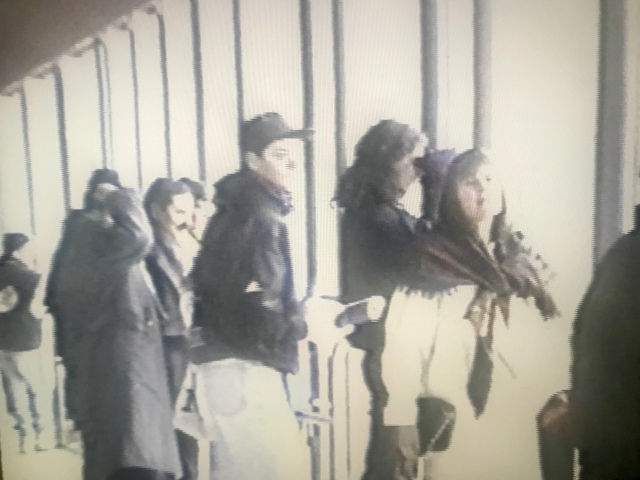 That’s me with the hair, looking through the binoculars north to mid-town Manhattan, at 1,310 feet. Shockingly, the guy in the baseball cap behind me, who looks like he’s about to mug the lady in the headscarf, is Martin.

I’m not going to lie: it was 1994, still in the pre-digital, pre-social world so, in lieu of an actual photograph, this has been screen-grabbed from a very shonky home video recording, hence the stunningly poor quality (again) of *another* world-famous landmark.

Famously, just over seven and a half years later, the ‘Twin Towers‘ would be no more, making this an especially poignant memory. Hopefully, there are places in eternal Hell for all those involved in that atrocity. I’m tempted to wish for the same fate for all involved in developing the ludicrous ‘white balance’ setting on 1990s video cameras that just loved to reset to default and white out priceless experiences like this. Most of our NYC footage is next to useless because of it. If you thought John Lennon’s house in Berkshire looked eerily white in the video for ‘Imagine’, it’s nothing compared to our footage of his place at the Dakota Building, overlooking Central Park.

Kinda kicking myself that we did’t stop for a photo more. A quick pose on the helipad at the Manhattan helicopter tour would have been a great idea. Good times, though… 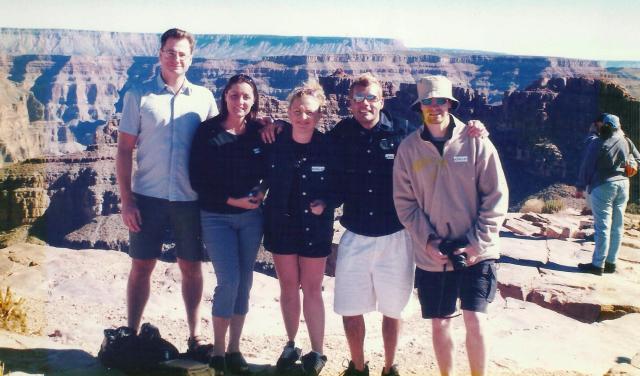 You may be tempted (again) to mock my sartorial style – who wears a fleece and a Bez hat to the desert? Before you do, you should know that, as a result of some unfortunately-chosen breakfast items in Las Vegas the day before, I’d contracted food poisoning and spent most of the preceding night wondering which way to point in the bathroom. As a result, my internal thermostat was all over the place.

Having cleared out the system, I’d taken nothing but water and Pepto-Bismol for the six hours before having to get into a light aircraft for the short flight over the Hoover Dam and on to the edge of the Canyon. Predictably, it didn’t go well and I can now claim to be one of a select number of people who have sprayed fluorescent pink liquid into 3 or 4 sick bags inside a small plane over the location once voted Number 1 in the list of ’50 Places To See Before You Die’.

I believe we were near Eagle Rock at this point but to be honest, I could just about stand up, let alone remember many details. Even in my highly diminished state, it was still one of the most magical experiences of my life.

Finally, a photo in which the photographer, the technology and the subject are all fully functional.  I’ve lost count of the number of times I’ve been to Paris but I’ll never forget my first visit there, on my 18th birthday, in the year of its 100th anniversaire.  This sojourn in 2013 (en route back to Calais from Bordeaux) was an opportunity to go to the top of the famous Parisian landmark for the first time since my very first visit, over twenty years previously.

Once we’d returned to ground level, we decided to take this picture to mark the occasion.  I have loads of pictures of the Eiffel Tower but this unusual angle of its familiar shape illuminated against the night sky is my absolute favourite.

I really can’t say what part of the world makes me happiest but Lake Como has to be in the Top 5.  The food, the pace of life, the scenery and the micro-climate make this such an enchanting place to be.  This picture was taken in our first visit there, in 2014.

We’ve been back twice since then and I can’t imagine ever not wanting to go back again.  It’s an achingly beautiful place and, if you like Italian food and wine, you’ll find it impossible to resist.

Star Wars nerds should recognise the location of this photo as being the place where Anakin and Padmé were married at the end of ‘Episode II: Attack of the Clones’.  The same location was also used in ‘Casino Royale’ for the scene where James Bond is convalescing after rolling his Aston Martin at speed.  In reality Villa del Balbianello is a former holiday home of the Rothschilds which is now a museum with the most manicured gardens you’ve ever seen. 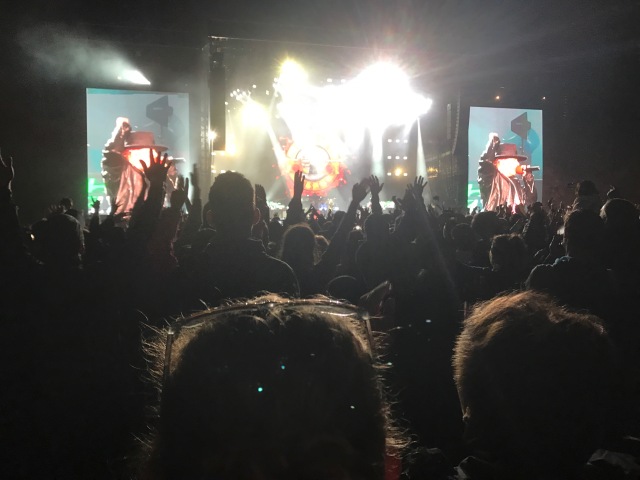 Travel isn’t just about going somewhere, it’s also about what you do when you get there – or why you even go.  This was certainly true of our short 2017 trip to Ireland – to watch Guns ‘N Roses on their ‘Not In This Lifetime’ tour.

I’m sure this might not be for everyone but the chance to combine a one-off experience like this while sampling/becoming re-acquainted with another culture (I mean, who doesn’t love Ireland?) is an intoxicating mix.  The Emerald Isle is doubly special to us as it’s the place where we got engaged, after another concert there.  Find someone or something you want to watch in a part of the world you want to visit and you’ll know just how rewarding it can be.

We also had time to nip in to Dublin, which, if you’ve ever been, you’ll agree is no hardship, either.

We were only there for 36 hours and much of that was spent fighting off jet-lag but Singapore certainly left a lasting impression – not least because it gave us the chance to sample the famous roof-top swimming pool on the 57th floor of the city state’s most recognisable building.

We were also lucky enough to be able to meet some old friends there, to catch up and to gain an insight into this heady fusion of a place that many tourists never get to see.

The most expensive night out I’ve ever had – but a pretty good one!  This was pure bucket-list stuff: to be in Sydney on New Year’s Eve and to be among the first in the world to welcome a new year.  With all the flights and hotels booked, there just remained the question of how we’d spend the evening.

Well, one thing led to another and we ended up booking ourselves onto one of the flotilla of boats that take in the famous light show from the middle of the harbour.  Five hours, three courses, lots of wine, twelve solid minutes of midnight fireworks and lasers and one fight later (not us), the whole thing was well and truly ticked off the list.  You know what?  Looking back, it all seems like an incredible bargain.

And then this: an important by-product of any travel experience is the chance to re-live it whenever you see the place on TV, thereafter.  I’m sure I’ll always tune in to the Sydney New Year display, covered in the UK at 1pm on New Year’s Eve.  With every passing year, I’ll continue to receive ever-greater value for money.  How many times can you truthfully say that a night out is really an investment? Increasingly, the chance to see more of the natural world is a major motivation to travel.  For this, I could have chosen any number of birdwatching reserves we’ve been to, or the Penguin Parade on Phillip Island.  Or even the Great Barrier Reef.  In truth, nothing, I repeat, nothing will compare with – or prepare you for – whale-watching.

When in California, we got the chance to see a pod of humpback whales feeding on anchovies, less than a mile from the coast.  The sights, the sound, the smell, the size of these amazing creatures is something so awesome to behold, you’ll find it impossible to compare it to any other experience.  It’s nothing short of an epiphany.

We tend to compartmentalise our travel dreams into simple lists that can be simply chalked off and that’s largely true of mere places.  I’m not sure it’s just as easy to say the same of true experiences like this.  We could have seen blue whales, grey whales or orcas that day.  Given the chance, I’d go back there like a shot – and do it all again. 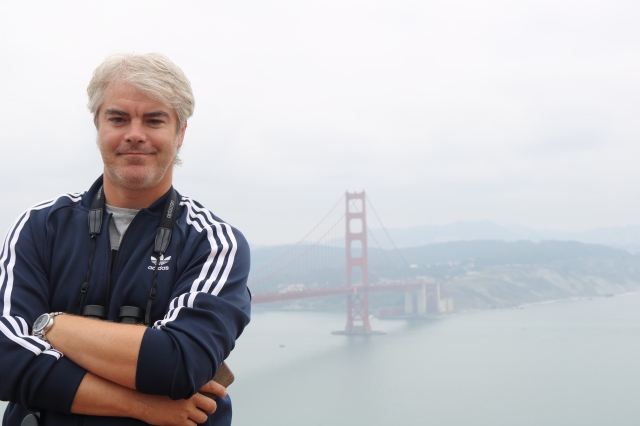 Travel teaches you the understanding that you will, at some stage, have to reconcile expectation with reality.  Once you’ve arrived, some places will surprise you and others will disappoint you.  Just occasionally, you find a place that is everything you always wanted it to be.  I’ve felt it in Amsterdam, in Melbourne and here, in San Francisco.  And then you’ll always love them and hope they never change.

As in most parts of life, timing is as important as any other factor: your own time of life, your motivations and aspirations – together with the point in the cycle of fortunes that affect the places you see.  I’m sure Moscow has changed hugely in the last 29 years – but then, so have I.  I could easily have listed a completely different list of 10 places I’ve loved to visit: Barcelona, Prague, Gothenburg, Hong Kong, Austin, London, Edinburgh, Los Angeles, Denver, Munich are all fascinating in their own right and no less worthy of a visit than the 10 I did choose.

Currently, with travel restricted, we should treat this time as a reminder not to take our world for granted – and never to stop feeling the need to explore beyond the horizon.  To continue to share the sights it holds and the people and the nature you can find there.  In the end, when your time on Earth is coming to a close, will you regret the amount of stuff you owned – or the number of places you got to see?