Shakespeare: The World as a Stage  (Bill Bryson)

I love reading Bill Bryson’s work.  There, I said it.  Some works of his I have loved more than others but I can’t say I’ve ever read anything he’s written that I haven’t enjoyed.  Enjoyment is therefore a minimum expectation when it comes to Bryson.  The real question I find myself asking when a new book appears is ‘will this one delight me?’

And so when I saw that the Bard of Iowa had taken on a study of the Bard of Avon, I couldn’t have been more thrilled.  Much as Bryson is famed and rightly lauded for his ‘Notes From…’ series and other travelogues, my most fondly-regarded works of his are both historic, rather than geographic.  His ‘A Short History of Nearly Everything’ remains my favourite: a dizzying journey through almost the entire realm of human endeavour, encompassing historical discovery to the progress of science, with pure Brysonian insight into all the key figures who occur along the way.  In second place is ‘The Life and Times of the Thunderbolt Kid’, his own history, following his experiences growing up in Des Moines in the mid-twentieth century.  In both cases, I was utterly delighted.  Would this, another historically-based book hit the impossibly high water mark for a third time? 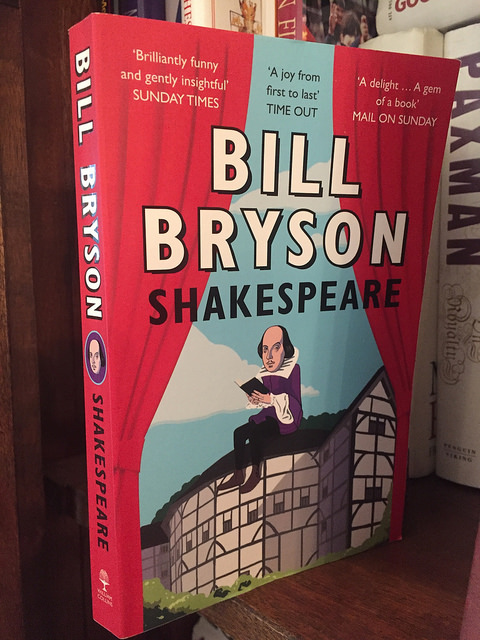 Unfortunately, I can’t say that it did.  I love Shakespeare and I love Bryson and, as expected, I did very much enjoy his efforts.  For the avoidance of doubt: this is a wonderful book and a better way to spend one’s reading time on than over 90% of the alternatives out there.  All the elements are present: the disarmingly folksy erudition of the present-day Bill as he methodically works through the life and times of sixteenth-century Bill, setting the scene and adding context wherever necessary and successfully walking the fine line of engaging a readership that includes both long-time Shakespeare fans and those wondering what all the fuss is about.

Why didn’t the book delight me?  It’s hard to say.  Perhaps my expectations have been set unfeasibly high; in the case of the two aforementioned books, I went into both with no particular preconception that they would be as good as they turned out to be.  Perhaps they merely served to make the author a victim of his own success.

I can’t say that I knew so much of the story that it felt pedestrian in the re-telling.  The ongoing impact of the Plague on London for much of Shakespeare’s life was shockingly brought home to me.  Neither did I know how little of his work was ever recorded, and how very nearly it was such that we could today be living in a world where no-one even knew he or his plays had ever existed.  The potential that such a state of affairs presents for Bryson’s trademark calm hyperbole is huge, and he exploits it perfectly.

There are numerous opportunities for the writer to examine and, where necessary, ridicule many of the protagonists in the industry of Shakespearean history that has grown over the four hundred years since his death and he does this with his usual alacrity.  There are also necessary diversions into areas of history in the interim, to add flavour to his musings: for example, how much more of Shakespeare could we have known today were it not for the destruction wrought by the Great Fire of London in 1666, fifty years after he died?

I was also personally interested in one diversion the book takes: his ‘lost years’ in the 1580s.  He is presumed by this stage to have been a young actor, touring the country and, rather tantalisingly, his name appears in documents connected with the family of land-owners in Lancashire and may even have performed at Rufford Old Hall, near Ormskirk.  Ultimately, there is no greater compulsion than mere conjecture and nothing is proved by the appearance of a ‘William Shakeshaft’ in Alexander Hoghton’s will as it was not a particularly uncommon name for the time.

In conclusion, while it’s true to say I found the book not to be such stuff as dreams are made on, suffering the slings and arrows of outrageous fortune, I still found it lovely and temperate and, though its course of inspiring true love never did run smooth, all’s well that ends well.

Uovi “Albese”: poached eggs on toasted sourdough, with balsamic glaze. Named after the breakfast I once concocted just outside Alba in Italy 🇮🇹…
I’m re-purposing a 30-odd year-old Billy Connolly gag here but this breakfast recipe is “perfect for that left-over” smoked salmon…
Homemade version of Sunday’s pasta dish, made from store room & fridge odds and ends (plus some smoked salmon from Christmas in the freezer). 🤏 *nearly* as good as the Olive Garden’s…
Tagliatelle del salmone
Zuppa del pomodoro
There’s no problem boycotting Russian vodka when there’s such a handy Swedish alternative… 🇸🇪🍸
You may think this is just a sausage and egg barm but you’d be wrong. It’s pork and black pudding sausages on wild garlic leaf and Dijon mustard, topped with a perfectly-poached egg. It’s basically the starter from a posh restaurant served, to go, on a barm cake…
Sarson Salmon (spiced grilled salmon cooked in onions & peppers), with pilau rice, saag aloo and keema naan.
Dressed crab, with chips